Ramjas College, of the Delhi University, was supposed to hold an academic seminar on 21st February 2017. The college’s Literary Society had invited Jawaharlal Nehru University student Umar Khalid to speak about a subject associated with his PhD, his topic being ‘The War in Adivasi Areas,’ according to a Hindustan Times report.

They opposed Khalid and Shehla Rashid’s involvement in the seminar because both of them are among the JNU students who were caught up in the nationalism vs anti-nationalism battle last year- Khalid was accused of shouting anti-national slogans, which was later disproved btw, and Rashid had started the drive to see her peers freed of wrongful implication.

Consequently, the college had to revoke their invitation of Umar Khalid and Shehla Rashid (former Vice President of the JNU union), says the HT report. In fact, the entire seminar was called off. 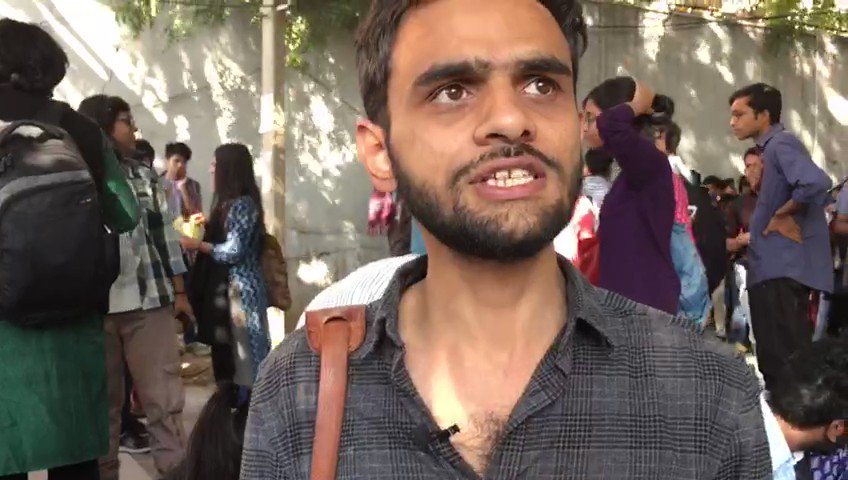 ABVP, your bullying tactics won’t stop us, says @UmarKhalidJNU at the protest outside ITO today. @TheQuint#RamjasCollege

Thereafter, the students who had been attending the seminar went out on a peaceful protest against the ABVP and DUSU members. They eventually returned to the hall.

“But before the second session was about to begin, electricity to the hall was switched off and stones came flying in. Window panes of the hall were broken. I wonder why police could not stop the protesters from throwing stones,” HT quoted Vinita Chandra, an English teacher in Ramjas, as saying.

Substantiating their peace uprooting activities, the DUSU president Amit Tanwar told HT, “These people shouted anti-national slogans on the JNU campus. They called for  destruction of India. How can we let them speak in DU?”

(If only he could see the irony of his statement. Basically, the ABVP and DUSU people resorted to hooliganism to save our country’s pride.)

The protests snowballed into large scale mistreatment of the students, who had gone to attend the seminar, at the hands of the ABVP and DUSU members.

Meanwhile, the Police have been accused of inaction. They have reportedly not taken the students’ complaints seriously and neither have been able to stop the ABVP activists from creating havoc in the college premises. 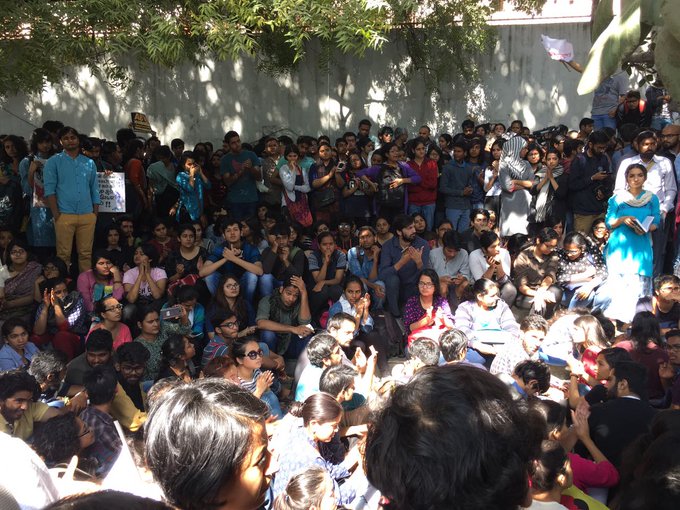 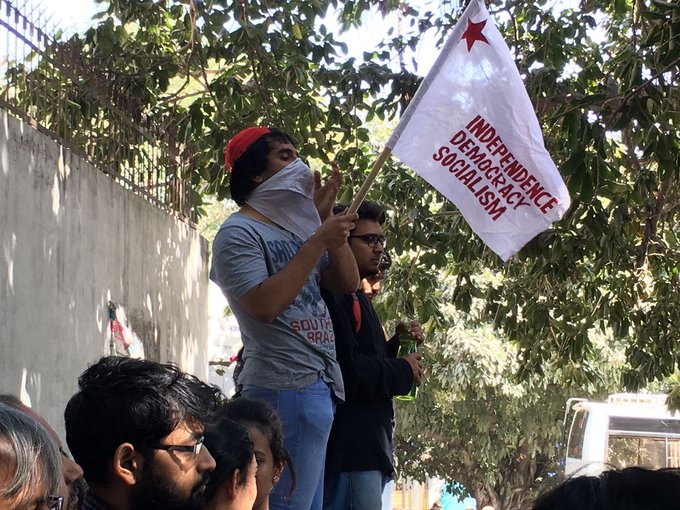 Here’s what the people, who witnessed it (and got manhandled themselves), have to say:

The Quint’s reporter, Taruni Kumar, who was manhandled, describes the ordeal: 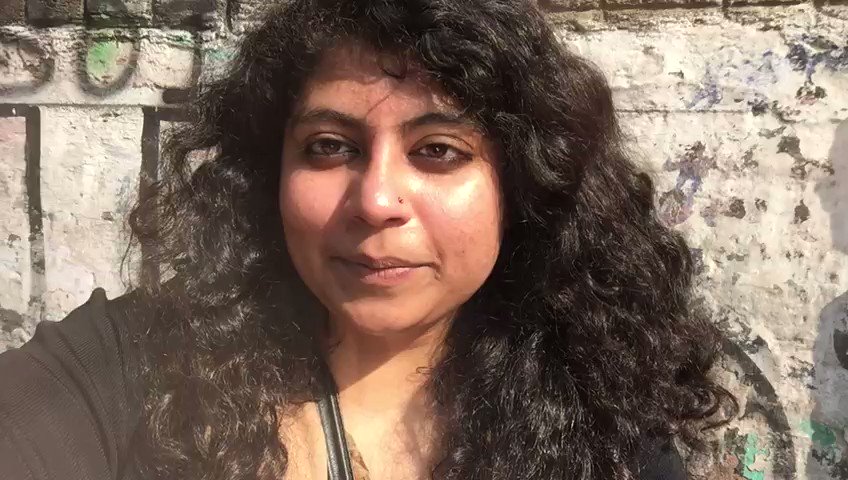 .@TaruniKumar narrates what happened to her on the ground while reporting the clash between ABVP and AISA outside #Ramjas college.

Sanskriti Tomar expresses concern over the mistreatment of students by the police:

A witness to the incident, a girl* writes a long Facebook post to spell out the details of the attacks and what followed them (read: police inaction):

“‘Gundagardi se ‘azaadi’, ‘abvp se ‘azaadi’, ‘maardhaad se ‘azaadi’ , ‘fir darj kro’, ‘we want justice’s ‘sanghwad se ‘azaadi’ ‘ye university hmari hai gundo ki jageer nhi’ ‘sanghwad police se azadi‘
These are the slogans that the PEACEFUL bunch of people who had been terrorised in Ramjas during a seminar and those who showed up in solidarity were using during their sloganeering.

The ABVP goons had gathered inside the college and were shouting ‘Bharat Mata ki jai‘ unnecessarily (probably because that is the only slogan they have at hand and it is the easiest to hide your gundagardi under the garb of patriotism and nationalism’.

Leaving the group was even more dangerous because the ABVP had surrounded us from all sides and every individual who left the group, was trying to leave, or was not even part of the gathering was seeing beaten up.

We were pushed away from the college and moved towards the Arts Faculty (the entrance opposite to srcc) where another round of stone pelting (not stone, bricks). 15 or so got injured, many of them were bleeding heavily and were taken to the hospital.

The ‘Bharat Mata ki jai’ brigade was hurling abuses and giving rape threats to women on the other side, when a girl started running away, an abvp goon who was just shouting ‘Bharat Mata ki jai’ said ‘Bhag randi bhaag’. I along with many others was also hit by those bricks.

We continued walking till Maurice Nagar police station. On one side of the road was ABVP and on the other were us. The police tied two ropes around us while the abvp stood on the roof of police buses to shout and throw stones and even glass bottles . By this time they had become more creative. They started throwing eggs at us and labelling us as ‘deshdrohis‘.

They also carried a Tricolor in their hands (the stick of which was used to actually hit many protestors). The police did absolutely nothing when abvp goons were giving us death and rape threats. (All for Bharat and Mata).

By then we started demanding action from the police (it’ll be right to say sanghi police). We demanded an fir against the goons but the police, who had witnessed all the violence said ‘we will take complaints from both sides and see if it is a cognizant offence or not’.

We, very peacefully told the SHO ‘That Maam, just show us the fir number and we will leave immediately. We were still talking to the SHO when the police started lathi charging on the students and teachers who were all sitting in a circle. There was a stampede.

They were beating us saying words like ‘teri himmat kaise hui’, ‘teri itni himmat‘. Our friends have marks of lathi on their backs, their clothes were torn, shoes lost, our wrists have marks of being dragged, there are blood clots and pain. We were then filled in buses and were given ‘delhi darshan’ for two hours.

We had no clue where we were being taken. By the way it was an illegal detention because it was already after sunset and police cannot keep women in detention after that time. We were then dropped at hauz khas all the way from maurice nagar. We had no money to come back. Our phones were switched off.

But above all we were all scared to return to the campus as abvp was on a run and was doing midnight raids on pgs and randomly hitting people. We were fucking scared to return to spaces which were our own because we could have been raped, beaten up. Abvp has been given the right to attack and display unrestricted hooliganism under the garb of ‘Bharat mata’ and the National Flag.

If just the word ‘azaadi‘ triggers your violent erection then stop celebrating 15th august as yaum e azadi. The university is not a space for you to get your sanghi orgasms. We will resist this hooliganism and keep asking for universities to be democratic spaces and will keep questioning the politics of gundagardi and violent masculinity.
Ye university hmari hai gundo ki jageer nhi.

They just cannot indulge in discourse and conversation. Ever.
They are offsprings of an organisation that has opposed the Tricolor and always paid respect to Bhagwa.
They can do nothing but to target the minorities and marginalised under the garb of deshbhakti and hollow Nationalism.
I am also amazed at the uni-color, immediate organisation of the abvp goons.

I condemn abvp as well as the sanghi, sold out police.

P.s. it is not about ABVPvs AISA. hundreds of us were there who are not affiliated to political parties. We are students who had been brutally beaten up during a seminar and those who came for solidarity against hooliganism.“

TBH, this audacious show of lawlessness under the cover of nationalism is scary. It is very scary.

*The girl’s identity has been kept concealed for safety.